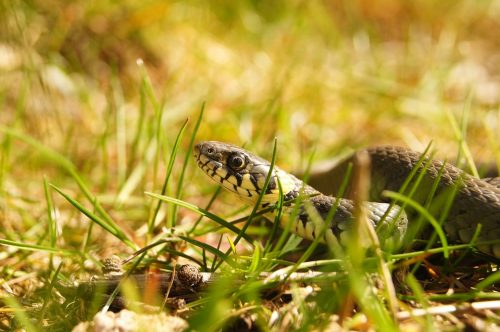 The grass snake (Natrix natrix) is the UK’s largest snake species, and arguably our most familiar snake – because they have a habit of visiting gardens in search of a meal, or a place to lay their eggs. They’re striking to look at, with attractive colouration and golden eyes. They aren’t to be feared – they’re shy, they don’t bite, and are not venomous. If threatened, they may ‘play dead’ – where they loll on their back, with their underside exposed, and their tongue hanging out.

How do I identify one?
Grass snakes have greenish-brown skin, with a distinctive ‘collar’ around their neck. This appears as a yellow band, with black crescent-like marks next to the yellow. They have black vertical bars along their sides, usually appearing more prominently in male snakes.  These also appear on their head, under their eyes. One obvious characteristic of the species is their eyes, which have a round pupil – rather than a vertical, narrow one, like those of adders.

Where do they live?
They are found throughout England and Wales, but aren’t very common in the more northern parts of England.  They favour lowland habitats, like woodlands, commons, hedgerows, and gardens. They also like to explore areas with lakes and ponds. This is because they particularly like to prey on fish and amphibians.

How can I encourage them?
Garden compost heaps can be a great help. Females lay their eggs in June or July, and seek to hide their clutch of eggs within damp, rotting vegetation – compost heaps are a perfect example. The young snakes hatch in August or September. If you already have a compost heap in your garden, keep an eye out for females or their hatchlings. Remember, grass snakes hibernate through the winter until April. Try keeping a log pile or two in your garden where the snakes can hibernate.

Where can I spot one?
You may see one hunting around the edges of a lake or pond, on warm summer mornings from May to July. In the UK, you’re likeliest to spot them in the south or the Midlands, in sites which have both wetland areas and more open, drier habitats.

Let us know if you encounter a grass snake in your area!