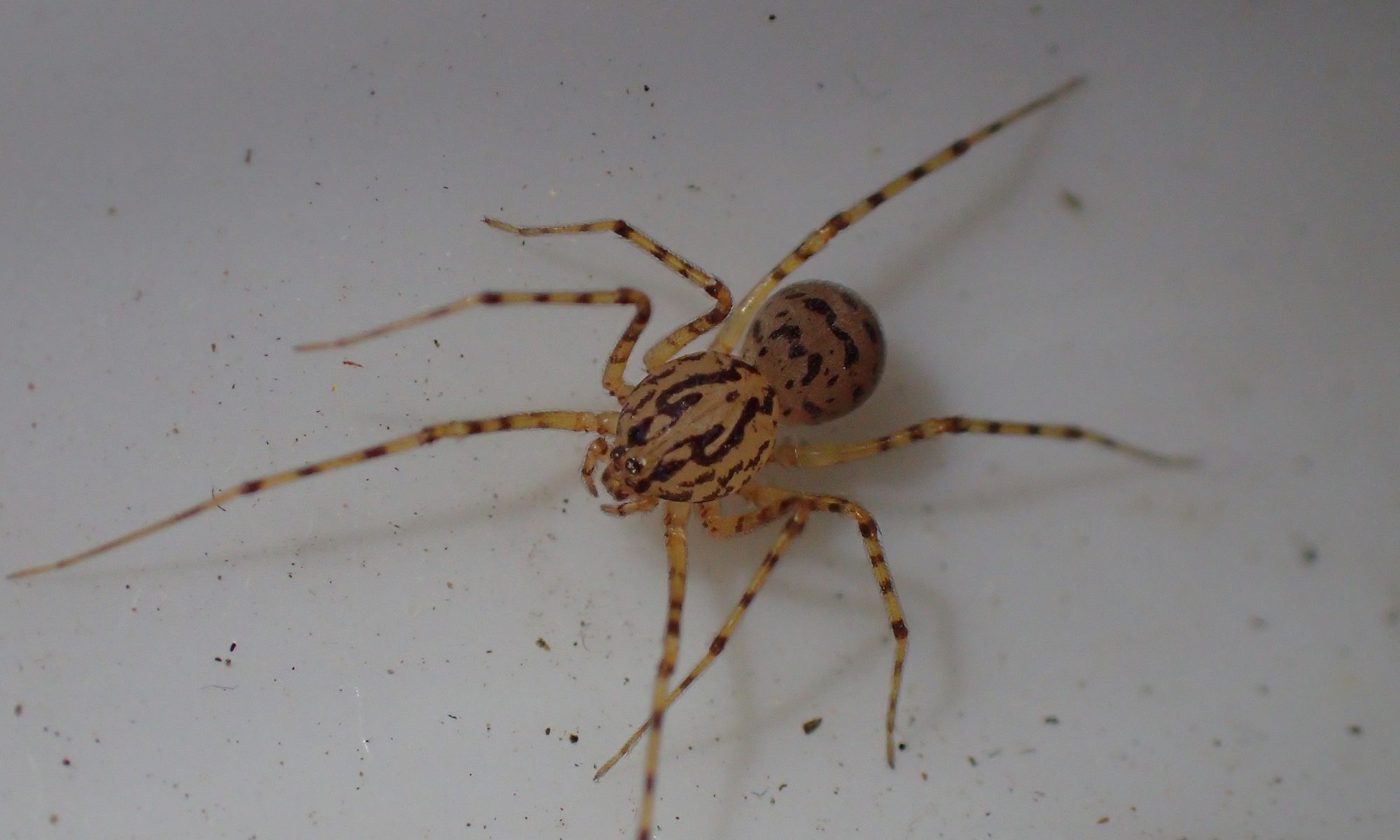 Whilst they may not be many people’s idea of a perfect housemate, there are a number of spider species that happily make our home their own. Some of these may cause us a slight shiver or involuntary gasp as they suddenly appear running across the floor or when we shift the sofa, others however would struggle to worry even the most committed arachnophobe.

This piece concentrates on three smaller species which have largely come to rely on buildings to survive, this ecological association with humans is known as synanthropy. One of these is widespread, the other two are scarce, but all are under-recorded, certainly there is no shortage of available habitat.

One group, the cellar spiders, are the current subject of a British Arachnological Society (BAS) survey, the familiar Daddy-long-legs Spider Pholcus phalangioides is widespread but mainly recorded in England. With a body length of 6-8 mm it can be typically found in the corner of rooms and provide a useful service removing unwanted species such as mosquitos. When disturbed they violently shake their web to attempt to confuse any threat. Despite their fragile appearance, they are veracious predators and will readily eat much larger house spiders so really should be seen as the arachnophobes friend.

In older houses or basements you may be fortunate to find the Wine-cellar Spider Psilochorus simoni, this species is much smaller than Pholcus with the body just 2-3mm long and hides away at ground level. It is thought to have arrived from America, via France with wine shipments and earlier records were mostly associated with wine cellars, hence the English name. The small jade green species is widespread but rarely recorded with fewer than 70 UK records.

A distinctive third species to look out for is the Spitting Spider Scytodes thoracica, this species is only six mm long with a distinctive shape and patterning. This species actively hunts rather than building webs, and catches its prey by spitting an adhesive liquid over it, forming a mesh cover that allows them to safely approach before biting, removing the ‘glue’ and feeding. The ‘spit’ travels at around 30m/second so an attack takes just 1/700th of a second; they also use this approach as a means of defence.  This species is mostly found in south and east England, but with scattered records elsewhere, the photo here is from Devon, were it was only the fourth record in the last 25 years.

Whilst these species might not be of conservation concern they can be easily recorded from the comfort of your own home and your record may help fill in the jigsaw by adding a new piece to the species distribution map.    And once you’ve starting watching and recording spiders who knows where nature will take you next.

For more information on spiders take a look at the BAS on Twitter https://twitter.com/BritishSpiders

If this message does not disappear automatically after 5 seconds, please refresh your page.
Accept Read More