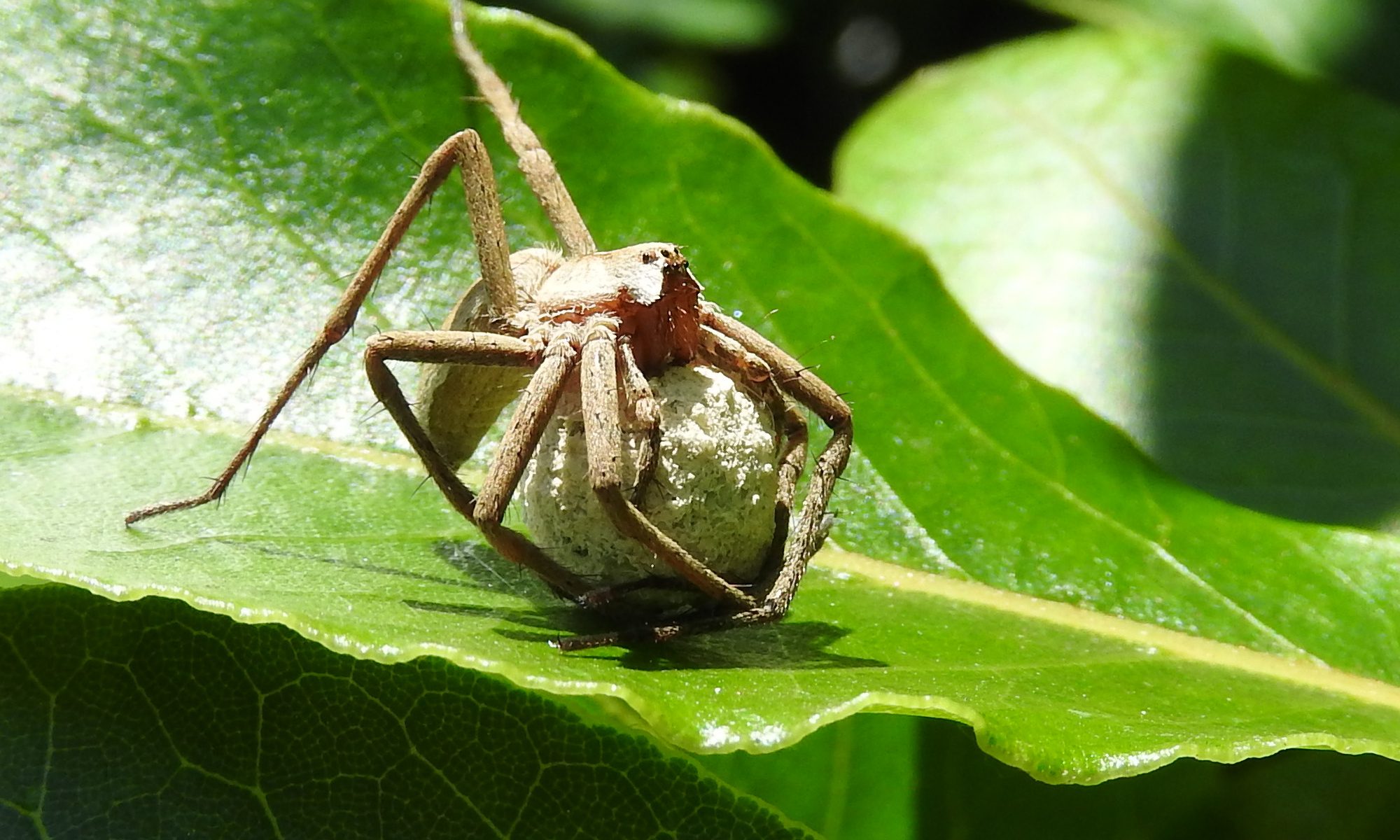 But when it comes to looking after the babies, spiders have it down.

That’s not quite true across the board…. Most spiders are solitary creatures and do not invest much effort in the care of their young, once eggs have been laid. A number of our native species, however, are sub-social, living together in communal webs at certain phases of their life, constructing nests, caring and feeding their young. (Salomon, Schneider, & Lubin, 2005)

Most spider species have a similar mating ritual, the male performs a dance for the female while she watches and makes her decision (this may also be accompanied by the gift of an insect – their equivalent of a romantic dinner date!).

The female spider generally being bigger than males, mating is a wary process and the male carefully transfers his sperm and then gets the hell out of there. This is where things start to differ from species to species, but some of our eight-legged friends are fiercely protective mothers.

This little friend was found in the moth trap at Wild Ideas HQ, in Teignmouth, this morning.

She looked a bit strange and bumpy, so a closer look was required.

As you can see, those bumps were actually her tiny offspring, hitching a ride. The wolf spider mum will carry her egg sac with her, mending any damage and keeping them warm. Just before hatching, she will make holes in the egg sac so that her young can escape with some ease.

They then climb onto her back and interlink their legs to stay safely on board and she then takes them everywhere until they are ready to face the world on their own.

This Nursery Web Spider (Pisaura mirabilis) is warming her egg sac in the summer sun, while keeping it very closely guarded. Just before the babies hatch she will build a silk tent and put them inside for protection.

The egg sac is held in the mouth parts as she moves around, going about her daily business. Shortly before they hatch, she will construct her tent, or ‘nursery’ of dense silk and she will stand guard outside while her spiderlings hatch.

Keep an eye out in dense herbaceous borders for their tents around mid-June to mid-July, although a smaller number may be seen in August and September.

If their stories make you wibble, then brace yourself. There are species of spider, such as the astounding Black lace-weaver (Amaurobius ferox) which put these fabulous mothers to shame.

This species pays the ultimate price for motherhood, as they practice matriphagy….. From matri- (mother) and the suffix -phagy (to feed on).

The female Black lace-weaver lays anywhere between 60 and 130 eggs… After the spiderlings hatch, the mother lays another batch of eggs on which the young feed.

Once these have been consumed, the mother will then agitate the web, encouraging the young to climb onto her and bite with her their tiny, toxic fangs and devour the mother as their first ‘hunted’ meal.

Dr Kil Won Kim of the University of Incheon of the Republic of Korea, who has researched this species’ behaviour has discovered that the young who feed on their mother in this way, gain extra body mass, faster development and increased hunting skills (most likely due to their increased mass).